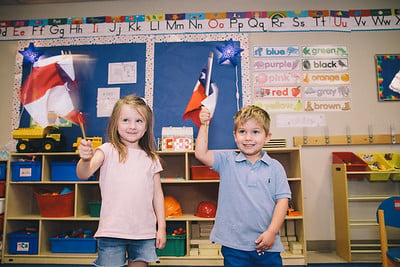 Casner Christian Academy has a rich history full of tradition and patriotic values that are rooted deeply in and governed by the Christian faith. Casner Christian Academy, originally called Highland Park Baptist Preschool, was established in 1965 at Highland Park Baptist Church. In 2008, the school became a 501c(3) non-profit and moved to its current home at Hillcrest Baptist Church. The school changed its name to Casner Christian Academy, honoring Ms. Lucille Casner, who had been an integral part of the school for over 45 years, and was the headmaster at the time. Ms. Casner began as a four-year-old teacher and later became the school’s music teacher and headmaster. Under her leadership, the traditions of Flag Raising, Sing Song, Christmas and Spring Programs, as well as Chapel, grew into the wonderful events that carve such special places in our hearts. With the celebration of Casner’s 50th Anniversary around the corner, the school continues to provide children with a foundation of faith and love that prepares their hearts and minds for the path that the Lord has planned for them.

After 45 dedicated years, Ms. Casner moved into retirement at the end of the 2012 school year. We have all experienced Ms. Casner’s love for our country and her fierce desire to teach our children to celebrate patriotism. Each one of us has been touched by her love, humor and true desire to give our children the very best. We all have personal stories of Ms. Casner and for years to come we will forever hear the ringing in our ears: